TIMING IS EVERYTHING: Deciding when to play even the most random of song request

TIMING IS EVERYTHING: Deciding when to play even the most random of song request

There is a time and a place for everything. By this same logic, there is no such thing as a bad song, rather just a bad time to play it. Especially at a wedding or event where these songs are important to the hosts or party-goers, playing these otherwise unplayable songs are your one sure-fire ticket to fan-adoring success.

Now, I do realize that this is an argument that will make me unpopular with musicians and DJs alike, as playing random song request can be super dangerous to derailing even the wildest of parties.  But this is exactly one of the little secrets I have found to making an event truly memorable is by boldly playing the unplayable; finding that point in the evening that is perfect for dropping even the most random of song choices. This seems like quite the extreme statement as wedding/event music has become a genre to itself for one reason: people typically enjoy hearing songs that are fairly familiar. But it is by understanding the room and music and knowing when to play these generally undesirable ditties that the music maker can take the party from good to GREAT.  Here are three great examples of some of the very random songs I have tried and the incredible memories they helped create.

“YOU CAN CALL ME AL” by PAUL SIMON

For anyone whose parents weren’t listening to music in the mid ’80s, you probably have never heard this song. Paul Simon did an incredible South African influenced album called Graceland, and “You Can Call Me Al” was the lead single (incidentally with a very entertaining music video featuring Chevy Chase that you really should take the time to watch!). While most of the time this song would blend in as one of your uncle’s random requests, this party on the lower floor of Atlantis Pavillions was different. It was on the bride and groom’s request list and while it seemed closer to dinner music, we managed to fit it into an older ’80s rock set earlier in the evening to see what would happen. The answer: Pandemonium! The dance floor erupted into this really cool conga-line/South African dance, an ecstatic sort of tribal feel that was absolutely unduplicatable. Luckily the song was easy for us to loop as this was a vibe that no one wanted to shake.

This really worked because the family has shared this song since the bride and her friends were young, so it brought back many joyous memories of dancing around the house together. There is no way to replace that with “Footloose” or the “TimeWarp”. Boldy playing this, now quite obscure, Paul Simon song was the only way to get this dance floor worked into a true frenzy.

Vendors Featured in this Article

Yes, Pantera. The setting was autumn at the Kortright Centre for Conservation with the dance party on their back terrace outside. While this may have looked like an ordinary wedding at first, a closer look would reveal some true metal-heads among the bride and grooms guest list. Now, metal music is not something you can rush into for there is no way to make your Portuguese grandmother love Slipknot (there just isn’t). And conversely, there is no way to make a metal head truly happy by simply playing an obvious Black Sabbath song. So, we waited.

We played some traditional music for the family, then Abba and Michael Jackson to make the parents happy mixed with some other obvious ’80s and Top 40 music. Then midnight came and it was clearly time to go big or go home. This is a turning point where another party might play an old AC/DC or Black Sabbath song and leave it at that, but knowing what these party goers truly loved, the answer was to crank this one up to high octane. Pantera, if you are not familiar with them, is not for the light-hearted. It makes Marilyn Manson sound like pop music and were a heavy band before heavy was even a thing. If you would like to fully picture this, go ahead and YouTube this music video right now, and then imagine it at someone’s wedding. I do completely agree that in 999 times out of 1000, playing this song would be a disaster, but at this wedding it was absolutely legendary. Every single person was going wild on that Kortright patio and it created the vibe that the bride and groom were hoping for. I should also mention, no patio furniture was hurt in the making of this party (just in case anyone from Kortright happens to be reading this article!) 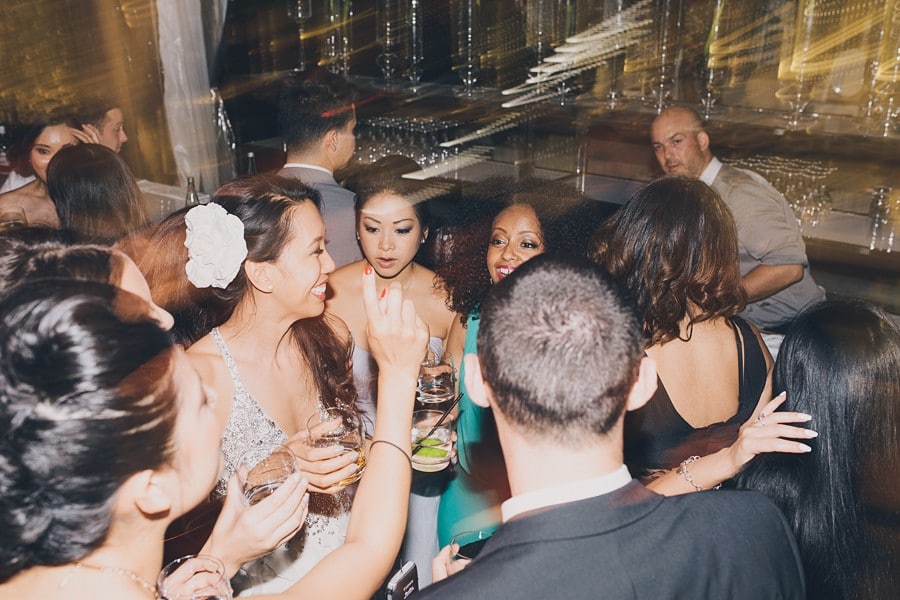 While the Venga Bus may still make appearances at various parties, it is certainly not always gladly received. While there are many dance hits from the late ’90s that are still quite popular at parties (Spice Girls, Backstreet Boys, Aqua, Whigfield etc.), this sweet-toothed favourite from days of parties past is by all means a risky one to pull out. It’s unabashedly cheesy in its triumphant familiar train whistle.

Why is this dangerous? Try playing this song for anyone NOT in this target demographic and witness the stares of pure evil for yourself. Knowing when to pull the trigger on a song like this isn’t easy, but well worthwhile when you get it right and make their minds melt.

This party was like no other of course. Everyone on the dance floor at the Berkeley Church & Fieldhouse was exactly the right age for this set, that of course being in their pre-teen Much Music loving years when these songs were first released. What began with “Stop” by the Spice Girls, moved to Backstreet’s Back, and then to the S Club Party theme song. I could tell we were just getting started as Whigfield and “Doctor Jones” by Aqua didn’t slow them down at all – Outhere Brothers and Blue by Eiffel 65 only amping them up more. It was almost time for the wave to crest, but not before pushing the party to 11 with this otherwise fairly tacky techno track in “WE LIKE TO PARTY”. The second the dance floor heard the Venga Bus coming, it was absolute pandamonium which looked like a mix of a conga line, jumping contest, and hand waving frenzy.

For every party there is a crazy interesting song that will be more popular than the others and at the same time completely unplayable at another party. One man’s tacky trash is another man’s favourite t-shirt. Be bold enough to pull those otherwise unusable garments off the floor and wear them with pride. Just remember to immediately take them off again before they start to smell.

Is it Ever Okay to Uninvite a Wedding Guest?

How to Communicate Last Minute Changes for Your Upcoming Event